U.S. Rep. Joyce Beatty, the Central Ohio Transit Authority and The Ohio State University presented Ohio’s 14th Annual Statewide Tribute to Rosa Parks, “The Power of One,” on Monday, Dec. 3 at the Fawcett Event Center, and Tuesday, Dec. 4 at the Southern Theatre. 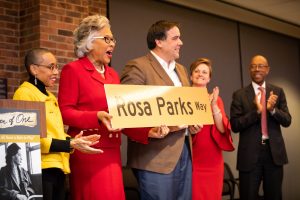 During his remarks, Mayor Ginther announced the city will name North High Street between Broad and Gay streets “Rosa Parks Way” in recognition of Parks’ courage and transformative action.

A studio audience participated in a panel discussion titled “Footsteps: We All Have a Role to Play.” The panel featured Hasan Jeffries, Associate Professor of History, The Ohio State University; Ginette Rhodes, student and President of The Ohio State University Chapter of the National Association for the Advancement of Colored People; and New York Times best-selling author Andrea Davis Pinkney.

“By shining a light on the legacy of Rosa Parks today, we illuminate the road to tomorrow for those who are walking with strong feet and heads held high. That is Rosa’s legacy,” Pinkney said. Pinkney’s book is titled “Boycott Blues: How Rosa Parks Inspired a Nation.”

The panelists discussed Parks’ life as an activist, how small actions can lead to big change, the next generation of civil rights activists, and what steps everyone can take to safeguard equality. WBNS 10TV news anchor Jerry Revish moderated the discussion, and WOSU-TV recorded the panel discussion to be included in their Columbus Collaborative Series.

Ohio was the first state to designate Dec. 1 as Rosa Parks Day to honor her life and legacy as the mother of the modern civil rights movement. In 2005, then-State Representative Joyce Beatty wrote, advocated and won unanimous support to pass Ohio’s legislation in the 50th anniversary year of Mrs. Parks’ courageous act. In refusing to give up her seat on a Montgomery, Alabama, bus to a white passenger, she sparked the Montgomery Bus Boycott and the modern civil rights movement.

WBNS-10TV served as the media sponsor of the 14th Annual Statewide Tribute to Rosa Parks.